Sam Tidmarsh
Researchers said the age group is the ‘new battleground in the streaming market’.

Over-55s are the fastest-growing group of new users of subscription music streaming services, a survey has suggested.

A further 1.1 million listeners from that age group had subscribed to services such as Spotify, Amazon Prime Music and Apple Music in February 2020 compared with 12 months earlier, according to research from the Entertainment Retailers Association (ERA).

This means they accounted for over a third of the 2.8 million new streamers in the UK over the period, the ERA said. 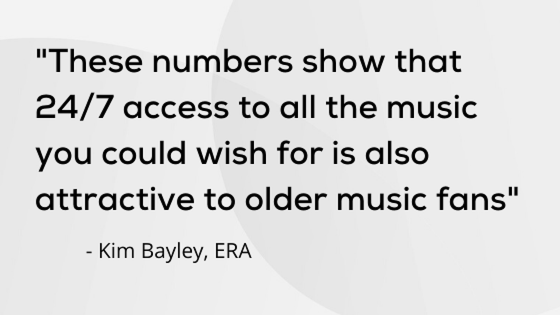 The 90% increase in the number of over-55s paying to stream music over the period was more than four times the growth in the number of people across the population (18.5%), according to the research.

The data comes from ERA’s consumer tracking study. The body said it surveyed a representative panel of approximately 2,000 UK consumers about their entertainment consumption habits every quarter for the past six-and-a-half years.

“Previously streaming services have very much been regarded as something for music’s traditional younger fanbase.

“These numbers show that 24/7 access to all the music you could wish for is also attractive to older music fans.”